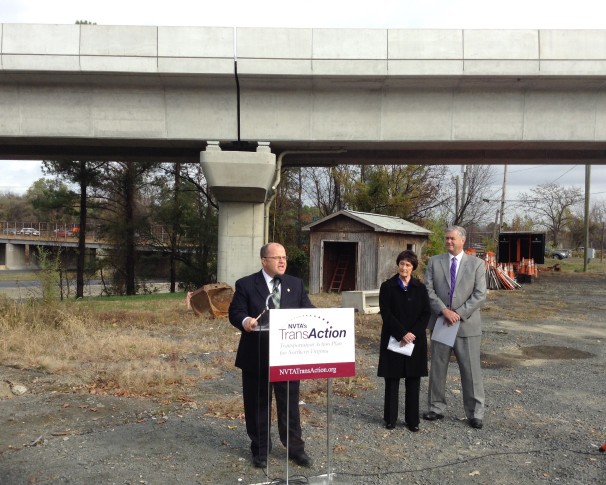 Read the story at WTOP.com

TYSONS, Va. — Ask local commuters about transportation priorities, and almost 6 in 10 say they’d like to reduce trip times. And more than half say they’ll be interested in trying a driverless car when they become available.

In a survey of northern Virginians on the region’s long range transportation plan, more than 70 percent said the region is doing a “mostly bad job” in managing traffic flow and congestion.

The Northern Virginia Transportation Authority commissioned the survey as part of its effort to involve the public in updating the regional plan, dubbed TransAction.

Martin Nohe, chairman of the NVTA and a member of the Prince William Board of County Supervisors, says only 8 percent of the 610 adults questioned had ever heard of TransAction.

“And I’ll admit some people of those folks may be saying they’ve heard of something they really know very little about.”

Fairfax County Board Chairman Sharon Bulova, in a news conference, says regional commuters know what they want: “They want faster; they want smoother; they want safer, and they want more predictable trips.”

In a news conference near Virginia Route 7, over the top of the Dulles Access Road, announcing the findings of the survey, Nohe said the problems of transportation cross jurisdictional boundary lines.

“People look at transportation in northern Virginia with a grim look, and you only have to look behind us to see part of the problem,” said Nohe.

“Some of the things we thought would be a problem, like not enough parking at the Tysons station — that turns out not to be an issue,” said Bulova.

While current regional funding plans include widening the Virginia Route 28 and U.S. Route 1 corridors, Dee Alsop, CEO of Heart+Mind Strategies, which conducted the survey, says commuters are looking into the future.

And that includes driverless cars.

“It is a phenomenon that people are generally aware of,” says Alsop. “They look at it as something 10 to 20 years down the road, although half of them say that’s something they would be interested in trying.”

Nohe says the long-term plan has to be flexible enough to include emerging technologies.

“There are no projects that NVTA is funding at this time that are specifically designed to accommodate driverless cars, but the plan we have developed is going to have to include that.”

Still, with Google predicting driverless cars will be on the market within five years, Nohe says regional planners are ready.

“Five years ago it seemed like science fiction; today, the prototypes are being tested in Northern Virginia,” says Nohe.

“As we design projects that the NVTA will have to fund, the new technology of driverless cars is absolutely going to be part of the consideration of what those projects look like.”